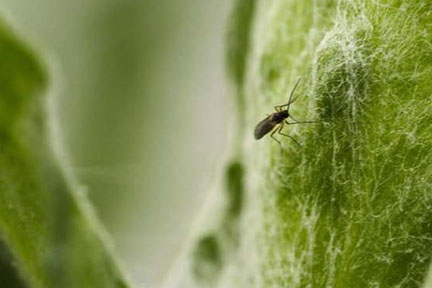 Garfield County is proud to work with the Palisade Insectary, funded by the Colorado Department of Agriculture, to promote the use of biocontrol on noxious species throughout Garfield County.

Biological control is the use of natural enemies, such as insects or pathogens, to reduce the range or density of a specific weed. There are approximately 30 species of biocontrol currently being tested and released on various noxious weeds throughout Colorado.

Biocontrol species are entirely host-specific, meaning they won’t harm any desirable surrounding plants such as crops or ornamentals. One of the primary noxious weeds being targeted is Russian knapweed, which is preyed upon by two predatory insects: the gall midge, Jaapiella ivannikovi, and the gall wasp, Aulacidea acroptilonica. 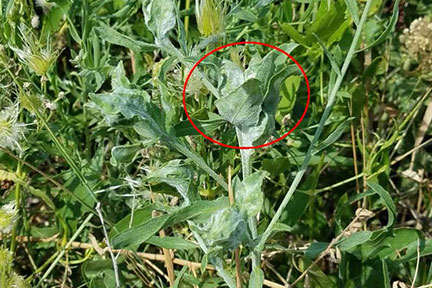 Here’s how the gall midge works: An adult female will lay her eggs on young, growing bud tips. After the eggs hatch, the larvae feed on the plant throughout three larval stages, causing the stem to stop growing and form a gall of fused leaves around the larvae. These galls block water and nutrient transport throughout the plant, causing growth to slow and preventing seed production. The larvae then continue development inside the galls and will emerge again in the spring as adults. After mating, the adult females will then migrate to surrounding knapweed plants to lay eggs, and the process will begin again. Each gall can contain up to 14 larvae.

Last year, approximately 3600 of these galls were released throughout Garfield County to aid in the control of Russian knapweed infestations. Garfield County Vegetation Management plans to do more releases this year and into the future, and has been noticing increased success in survival and regeneration of the midges. One location where galls were found was over two miles away from the nearest release site, meaning the midges survived and migrated to the new area on their own.

Biocontrol is not meant to take the place of active weed management, including herbicide application, mowing, hand-pulling, etc., but is a great supplemental tool to aid in preventing new plants from forming. It is important to note that the biocontrol agents do not kill the infected plants, but stunt growth and prevent new seeds from forming. Therefore, expecting to see large reductions in knapweed infestations due to biocontrol alone is not a feasible goal, but using integrated management techniques may definitely be improved with the incorporation of the insects.

For more information on biocontrol, visit the Colorado Department of Agriculture’s biocontrol page at https://www.colorado.gov/pacific/agconservation/biocontrol

If you are interested in releasing biocontrol agents on your property, or would like more information on weed management, e-mail Garfield County Vegetation Management.