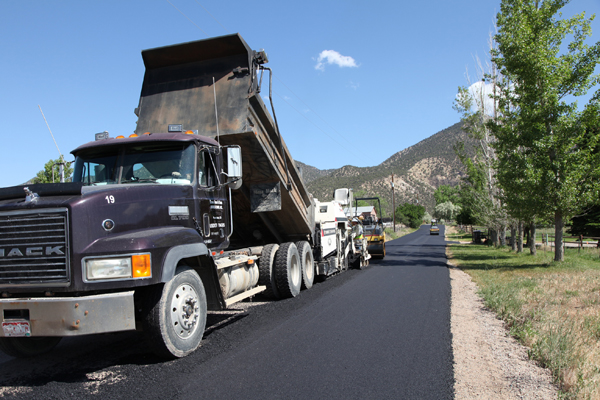 Prioritizing the road and bridge projects was, as they say, a rough road to travel. Among the determining factors for selecting the projects were:

Meetings between the Board of Commissioners and Road & Bridge district foremen resulted in unanimous agreement that all of the roads slated for improvements are a priority, and for this year, the projects that could be completed within the current year will be improved.

In many cases, the county has approved spending a little more now on a leveling course to provide a solid base on the roads prior to putting on the top layer of asphalt or chip seal in order to preserve the integrity of the roads for a longer term in coming years.

So, as they say, let’s get the show on the road! We’ve put together a project update page here to let you know which roadways have active crews in progress, how far they’ve gotten to date, alternative routes, and best estimates to project completions. Check back weekly to see how projects are progressing, and to avoid unnecessary delays. We’ll do our best to make sure there are fewer bumps in the road while you’re traveling throughout the county in coming months!

Garfield County Road and Bridge Department foremen and staff members honed their paving preparation skills this spring at a motor grader use and maintenance certification course.

The refresher course consisted of one day in the classroom, followed by two days of in-field training directly with the yellow graders the crew already knows all too well.

Joining Garfield County in this knowledge up – “grade” project were agencies from Mesa County, the City of Grand Junction, Pitkin County, City of Snowmass Village, City of Winter Park, City of Cortez, Clear Creek County and City of Longmont.

Drivers: Slow down and move over!

Drivers across the state are tragically reminded of the live-saving importance of responding to motorist events after an Englewood police officer was killed during a traffic stop this past Memorial Day.

Garfield County Detective Tamra Blackard formerly worked as a patrol officer and was seriously injured in 2002, when she was struck by a vehicle while she was assisting a motorist on Highway 82. She never returned to patrol duty, her career and life were forever altered that day.

Today, her heartfelt request to drivers continues to be, “Help us as we help others, by slowing down and moving over.”

This message from the Garfield County Sheriff’s Office is more critical than ever for deputy safety, and is equally significant to motorists driving through construction zones, as there are crews working alongside passing traffic.

Remember, slow down and move over. You’ll not only avoid a ticket and fine, you could save lives!

District 1 includes county roads numbered in the 100s (and below) in the South Canyon, Glenwood Springs, and Carbondale areas.

District 2 includes the Rifle, Silt, and Parachute areas north of the Colorado River – the “200” roads.

District 3 includes the roads numbered in the 300s – the Silt, Rifle, Parachute and Battlement Mesa areas south of the Colorado River.