September 26, 2011
County Road 320 is open, nearly all construction is complete.

GARFIELD COUNTY, Colo. – On Tuesday, June 7, 2011 the Colorado River in Glenwood Springs rose to 25,643 CFS, which is equivalent to 10.8 feet, flooding some lower level areas. The river did not reach the peaked levels predicted.

Flooding on the Colorado River occurred along I-70 near mile marker 94 east of Rifle, as well as, the Parachute area and the Parachute Ponds. Three homes located near the river in Rifle reported some minor flooding in and around the homes. Local Officials were called on the scene to help assess and assist with sand bagging to help redirect the flow of water away from the homes.

In Glenwood Canyon the Colorado River water level was covering the railroad ties with only the rails above the water in one location and within a foot of the tracks in many other areas. We saw minor flooding in the No Name area, sand bags are holding the river back, but the water seeping through was covering the lower areas.

The Roaring Fork River increased to 8,105 CFS/6.8 ft with no flooding along the river; 600 CFS lower than the levels we saw last year.

Officials are expecting the river’s intensity to remain above normal for the next few weeks, with some fluctuation of water levels depending on the predicted weather patterns.

Attached you will find landscape and Aerial photos of the flooding in Garfield County. As well as, a photo of a large catfish trapped in the yard of a local home flooded in Rifle, the catfish was caught by hand and released back into a river access by one of the neighbors.

1 pm – The bridge leading to a private home on Main Elk Creek washed away overnight, stranding the private bridge’s owner from access between his property and the county road.

Meanwhile, water levels have receded a bit along County Road 217, according to Garfield County Road and Bridge District 2 and 3 Foreman Wyatt Keesbery. He has reopened the road and the Rifle Mountain Park area to public traffic. “The water is not coming up on the road any longer in that area, and our culverts are working properly, so we don’t feel it is a hazard to travelers now,” said Keesbery.

County road crews have begun mitigation measures on County Road 320, where runoff flows have eroded and damaged sections of the road. Click on photos below to see mitigation work.

The photos show that the gravel shoulders of the road were getting washed away badly by water flows, and so road crews are cutting a trench across the road to divert the water. They are also creating a earthen berm to block water as a preventive measure. Keesbery hopes to begin repairing asphalt in the area within the next day or two.

“Right now, we’re holding everything on the county road system in place really well, and it doesn’t look like we’re going to close anything else for a while,” said Keesbery. “It’s a matter of waiting to see how fast the snow melt continues.”

10:50 am – County Road 217 and the Rifle Mountain Park area are reopened to public traffic.

4:02 pm – A hydraulics engineer and a bridge expert inspected the bridge over the Colorado River at Silt and determined that it will remain open at this time. High water is still a potential threat for closure of this bridge. 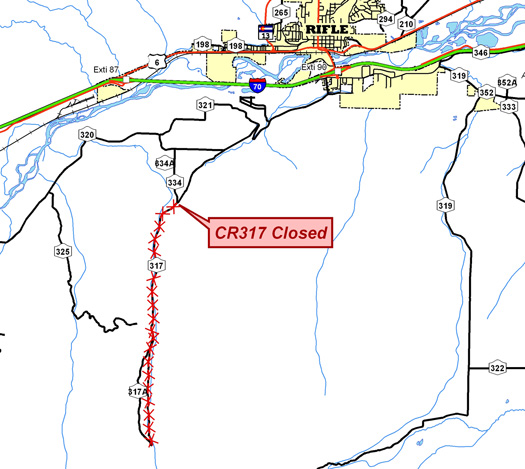 10:45 am – Significant road damage has prompted County Road (CR) 320 to be closed at the intersection of CR 323 and CR 320 until further notice. The closure extends approximately 1-mile from the intersection. Please use CR 309 to access CR 320. The alternate route is a “no haul” route for overweight vehicles on County Road 309, but Garfield County is making an exception during the closure. Trucks may travel over 309 for access between CR 320 and CR 323 during the detour. See map below. 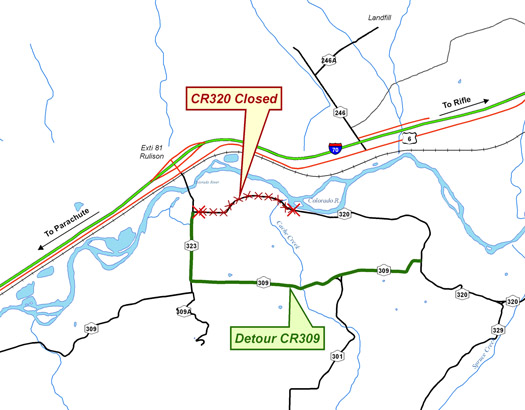 In addition, CR 317 at Beaver Creek in Garfield County is damaged and closed.

8:55 am – Garfield County Road and Bridge Department is taking some measures to close roads at risk from high water runoff. Before 9 am, June 7, County Road 320 was closed from the west side due to road damage.

In addition, the bridge over the Colorado River at Silt is pending closure as well. Updates will be posted on this website as they occur.

12 pm – Due to high water, Rifle Mountain Park and County Road 217 in the vicinity of the park (Little Box Canyon road) are now closed until further notice. Access is limited to emergency services and residents who live above the fish hatchery. For safety reasons, please avoid accessing this area by vehicle or on foot or bicycle until water levels have receded.

Displayed on the hydrograph below, outlooks are slightly higher than river flows in 2010. 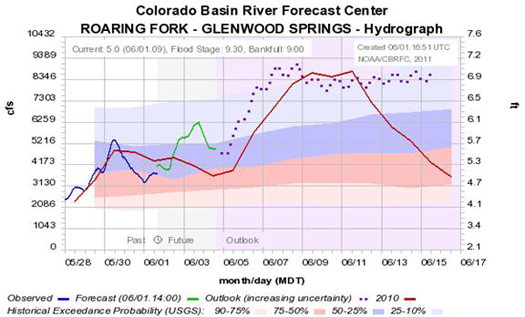 Emergency Manager, Chris Bornholdt, wants citizens to understand that the weather will be the determining factor impacting water levels along with snowmelt to include the uncommon levels of snow pack remaining in the higher elevations. Longtime locals have noticed an abnormal level of snow pack on all southern facing slopes, which will impact the remaining runoff numbers.

The current weather forecast is calling for temperatures to fluctuate over the next two weeks which will help to slow snow melt, reminding the public that any period of high temperatures could cause significant change in forecasted snow melt.

Officials are expecting to see a fluctuation in the rivers water levels with the expectation of reaching peak levels between June 6th and June 9th.

The Garfield County Sheriff’s Office wants to warn anyone planning to be around water flows, be aware of the speed of the water, floating debris, and watch for quick rising water levels. Use extra caution when along river banks and never allow children near moving water without a life jacket.

Please report to 911 immediately any threat to roadways or property you may see.