Harvey Gap Road is fully open
GARFIELD COUNTY, CO – Harvey Gap Road is fully open following realignment, reconstruction and repaving of a damaged section of roadway, which collapsed due to water flowing under the roadway subsection this fall. Garfield County Road and Bridge crews completed the reconstruction in approximately a month from the start of the construction phase, using the philosophy of French drain technology to allow water seepage without further damage to the road. Today variable message boards in the area notify travelers that the road is open. Minor cleanup and revegetation will be done in coming weeks.

While the closure lasted nearly three months, success in completing the project was due to many project contributors, in addition to exceptional weather. Garfield County worked closely in support of and with Silt Water Conservancy District (SWCD), both of which executed emergency procurements. SGM Engineering completed rapid design planning, Road and Bridge crews worked long hours to professionally manage and complete the reconstruction, and Frontier Paving completed the paving – each expeditiously for these individual phases of the project. Additionally, two landowners willingly negotiated realignment of the road to open the pathway to accomplish the reconstruction.

UPDATE
November 10, 2016
A damaged section of the Harvey Gap Road north of Silt has been realigned, the substructure repaired, and paving work is now underway. Garfield County Road and Bridge crews are paving the stretch through Friday, Nov. 11, after which the road will reopen once the work is complete.

The paving caps a closure that began in late August when the existing road’s substructure collapsed due to water-based erosion.

UPDATE
November 3, 2016
Garfield County is making major progress in realigning a section of the Harvey Gap Road where the substructure collapsed in August due to water-based erosion. Garfield County Road and Bridge crews are rebuilding the substructure with rocks and boulders in a manner that will function similar to a French drain.

GARFIELD COUNTY, CO – Preparations for excavation of the collapsed Harvey Gap Road section are complete, including removal of the asphalt and repair of an unrelated drainage culvert nearby. Excavation of the road area is underway to facilitate rebuilding of the road base. Wet dirt below the road will be excavated to rebuild a solid substructure to maintain the new road section’s traffic.
“It is unknown yet exactly how far down we will have to excavate to find dry ground,” said Garfield County Road and Bridge Director, Deb Fiscus, who reported the status of the project to the Garfield County Board of County Commissioners today.

It is expected to take about a week to remove the wet soils, depending on weather, and to see how deep dry ground exists under the current road alignment. Engineering plans and designs continue to further refine the project, in conjunction with the excavation that will ultimately result in a new road alignment, which will be developed slightly to the west of the current alignment. 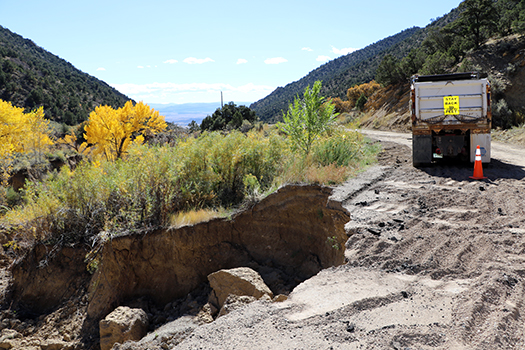 To stabilize the damaged section of road, Garfield County Road and Bridge crews will begin to rebuild the road with rocks and boulders that will act like a French drain. Additionally, layers of dry soil, along with boulders and construction fabric, will be added for increased stabilization. A rock platform will be established to support heavy excavation equipment in the slide area that was created by the sloughing.

The goal of Garfield County Road and Bridge is to have the road opened sometime in early November. “We hope to have it paved before winter, depending on the timing of arrival of winter weather conditions,” said Fiscus.

After taking several core samples, it was determined that the water in the slide area did not come from the Harvey Gap reservoir or inside the dammed area, but seeped from a water supply running alongside the road.

Boulders and soils for the rebuild will come from on site and from the county’s Road and Bridge Department yard, so trucks will be prevalent in the area. However, non-construction traffic will still be restricted from using the road until the construction is complete.

“Negotiations with the affected landowners are finalizing, and their contribution and commitment to this project has been very beneficial for the county and the traveling public to get access to this road once again,” said Fiscus.