GARFIELD COUNTY, CO – Construction crews have set 900 feet of pipe to relocate an irrigation ditch that runs along the Harvey Gap Road to return water flow for nearby residents, and Garfield County has hired SGM engineering to assess subterranean conditions under the road. A section had collapsed last month due to water coming from an unknown cause.

The pipe work was contracted by the Silt Water Conservancy District (SWCD), which operates the ditch. The SWCD said it anticipates having the irrigation water flowing again sometime next week, after it was shut off shortly following the collapse. The pipe was delivered to the site on Monday, and expeditiously set in place by Con-Sy
of Rifle.

Repairing the Harvey Gap Road, which remains closed as a public safety measure, has been made a top priority by the Garfield County Board of County Commissioners. The contract with SGM was approved for up to $125,000 on Monday by the board.

Test holes will be drilled to assess conditions, and the plan is for road construction to begin in the upcoming weeks, according to Wyatt Keesbery, assistant director of Garfield County Road and Bridge.

Earlier this month, the commissioners approved up to a $100,000 in emergency funds to match contributions by the SWCD to address the collapse. 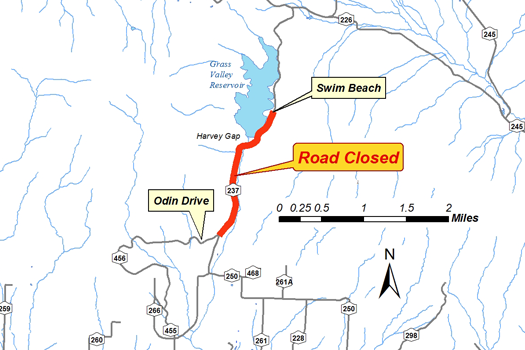