A Colorado Department of Public Health and Environment sample report released August 25 shows E. coli results from the last sample taken at the Harvey Gap Reservoir swim beach on August 18 were <1 col/ 100ml, which is well below acceptable levels for designated swimming areas. Colorado Parks and Wildlife closed the swimming beach at Harvey Gap on August 19 because of low water levels, which is common this time of year. Rifle Gap Reservoir is open to swimmers, however the swim beach at Harvey Gap Reservoir will remain closed until next year due to the low water level. 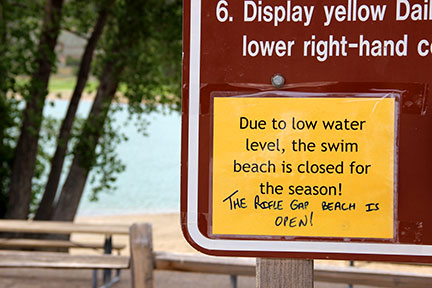 The lake also has low water levels, making swimming unsafe, according to CPW. A notice posted at the reservoir and on the Harvey Gap website indicates that the natural swimming area will remain closed for the rest of the season. Colorado Parks and Wildlife has not provided the Garfield County Public Health Department additional details at this time.

Escherichia coli (E. coli) bacteria normally live in the intestines of people and animals. Most E. coli are harmless and are actually an important part of a healthy intestinal tract. However, some E. coli can cause illnesses, with symptoms that range from mild to severe.

E. coli is contracted by ingesting contaminated food or water. The incubation period for a person experiencing illness from E. coli is usually three to four days, but may be as short as one day or as long as ten. The symptoms often begin slowly with mild belly pain or non-bloody diarrhea that worsens over several days. 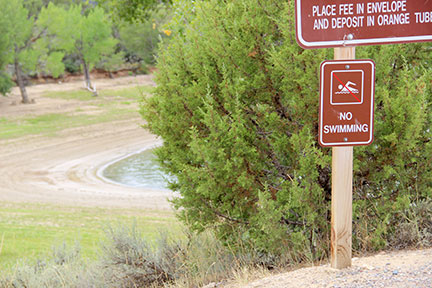 “If you have visited the park in the past week, it is a good idea to monitor yourself for symptoms, and contact your physician if you have concerns,” said Joshua Williams, Garfield County Environmental Health Manager. “Always avoid swallowing water when swimming or playing in lakes, ponds, streams, swimming pools, and backyard ‘kiddie’ pools as well.”

At this date, the swim beach at Rifle Gap is still open for public use.