The ride of life

The Straws pass good fortune on to children 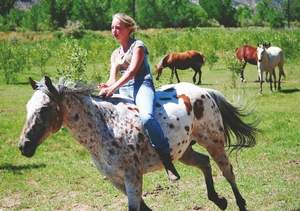 She squeezed her slender, 14-year-old frame through the barbed-wire fence as quickly as a fox through a hole. Her pant legs tucked in her worn-leather boots. She strode confidently up to a her horse.

“Her name is Crystal,” she said.

She used to have a pony named Jazzy, but “I grew out of her,” Christian said.

Crystal didn’t quiver as Christian grabbed a handful of her mane and pulled herself on to her back.

With a few spurs to Crystal’s side, the two galloped through the field as if there were no fences.

Christian’s life hasn’t always been painted landscapes and horse rides through summer fields. As a young child, Christian remembers not having a permanent place to call home.

Christian moved to Carbondale from Oregon with her mother around 2003. In the two years that followed, they moved eight times, according to Christian’s calculations. She spent many of her days hanging out in a coffee shops. Christian entered foster care soon after, which ultimately led to the Straw’s door at the Don Kriz Youth Farm in Rifle.

“When I got here it was kind of weird,” she admitted.

That was nearly four years ago, and Christian has since come to realize the great opportunity she’s been given. The ranching lifestyle took some getting used to, but she’s managed to transition.

“I was a city slicker, I guess you would say,” Christian said. 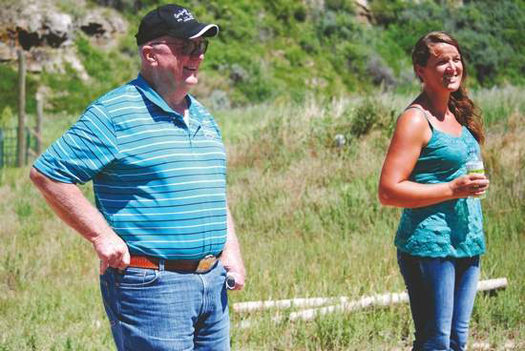 Ken Kriz, left, and Stephanie Straw watch as Christian Straw rides Crystal in the pasture of the Don Kriz Youth Farm. Stephanie, along with her husband Paul Straw, are the care takers of the youth farm which Ken started in honor of his late brother, who passed away in 2003. – John Gardner / Citizen Telegram

The Straws live on a small acreage, just east of Rifle on Mill Pond Road known as the Don Kriz Youth Farm. While the youth farm’s goal is to provide local 4-H kids a place to raise livestock, the Straws also take in foster kids. Kids like Christian.

“Foster care is something that I’ve always been involved in,” Stephanie said.

Stephanie, too, spent a year-and-a-half in foster care before she turned 18. She grew up in a community just south of Missoula, Mont., and said that being in foster care wasn’t a bad, or negative, thing.

In fact, it changed her life.

The experience also gave her a goal at an early age. A goal to help children in similar situations.

“I think, when you grow up in different environments, there’s kind of that cycle that kids get into, and it just showed me a different way to live,” she said.

As she got older and started having children of her own â€” three boys, James, 14, Garrett, 11, Joshua 9, and a daughter named Jakota who recently turned 16 â€” she remembered her experiences, and what she wanted to do differently for her family.

“Taking in foster care kids, even if they are only here for a short while, hopefully we are giving them a glimpse that they can have a different life,” Stephanie said.

The Straws were foster parents long before becoming a part of the youth farm, which besides their name, made the Straws the perfect family to take the reins of the operation. Ranching and parenting have many parallels. Nurturing youth to grow to be the adults of tomorrow.

“Some of their situations are so heartbreaking,” Stephanie said. “Some don’t even smile when they arrive.”

For Stephanie, watching the foster kids adapt to their new surroundings and become more comfortable with her family is as pleasant as a glass of ice tea on a hot summer day.

“Watching them come to life is nice,” she said. 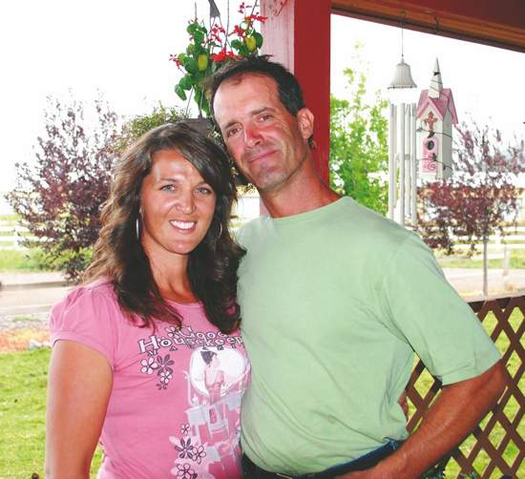 Stephanie and Paul Straw, pictured on the front porch of their home, are the care takers of the Don Kriz Youth Farm in Rifle. The youth Farm provides local kids a place to raise livestock and also provides a safe home for foster care kids. – John Gardner / Citizen Telegram

Paul and Stephanie have both seen that change several times through the years. None more profound than the change they saw in Christian.

According to Ken Kriz, the change in Christian was as apparent as her love of riding horses.

“(Christian) really took to the animals,” said Kriz, who started the Don Kriz Youth Farm in honor of his late brother.

Her first year at the farm, Christian raised a turkey for the 4-H Livestock Show and Sale at the Garfield County Fair. She earned $575 for it, Ken said.

“I was excited because I like raising animals,” Christian said.

At the Straw’s, being active in 4-H, raising livestock, or riding horses, isn’t a requirement, but it is encouraged. For Christian, being around the animals, especially the horses, was a welcomed aspect of living on a ranch.

Stephanie says that being around animals is therapeutic for foster kids. If Christian is having a bad day, she goes to the barn and hangs out with Ted, her Mini Hereford cow.

“They can form a connection, you know, with no strings attached,” Stephanie said.

The animal doesn’t expect anything from the kids.

“I do admire Christian,” Ken says, sitting in a wicker chair in the shade of the Straw’s house. “I admire what she has accomplished. She has blossomed into a beautiful girl.”

The scene is heartwarming. The Straws opening their home, and their hearts, to provide a life, if ever so brief, that these children may otherwise only dream.

“I’d rather live here than any other place,” Christian said.

Just about one year ago, that dream came true, when the Straws legally adopted Christian. It was a good fit. It was the right thing to do.

“It’s been kind of a journey,” Stephanie said.

It always is in the beginning.

Christian’s life may have turned out very different if her path had not led to the Straw’s door.

“When I look back, it was tough getting here, but it wasn’t tough choosing a family,” she said.

For her, just having a place to call home is the greatest gift of all.

The horse rides are a bonus.

What Christian earned this year by selling Ted, and her turkey named Buster, she plans to save for college. She may spend about $200 of her take, she says, but that’s it.

That’s Christian exhibiting responsibility, which she learned through 4-H, and from the Straws. This family, and this home, has given her more than just a hobby of raising livestock and a love for riding horses. It’s given her dreams. It’s given her goals.

“I want to be a doctor,” she says, as serious as a heart attack.

She aspires to travel and treat patients in underprivileged countries, spreading the love which she’s received from the Straws. And as much as she loves her life on the small acreage near Rifle, she says she would like to – one day – live near an ocean beach.

To get there she knows that her life’s path may take some unexpected turns and she may get thrown from the horse. But Christian has the strength to get back in the stirrups and ride again, even if there’s no saddle.