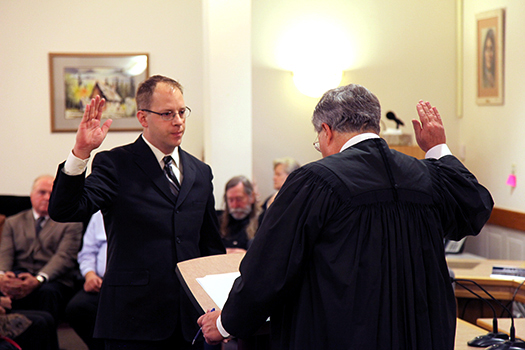 Garfield County Coroner Robert Glassmire was sworn into office January 13, 2015, after being elected in November of 2014. He has extensive law enforcement experience. Robert plans to enhance the services provided to citizens through the coroner’s office and to build stronger relationships with partner agencies.

Robert has worked for the Garfield County Sheriff’s Office for twelve years, and six of those were in the role as an investigator. He developed much practical experience and trained extensively in his role as investigator. Robert participated in a number of death investigations, including homicides, suicides, and child fatalities. Robert’s training also includes crime scene processing, medicolegal death investigations, interviewing and serving in a victim services role.

Glassmire served in the United States Marine Corps, participating in a 2003 Iraq tour as a Mortuary Affairs Marine, working in death response roles. He was honorably discharged as a sergeant.

In the role of coroner, Glassmire plans to work regularly with law enforcement agencies, the district attorney’s office and local medical facility staff to maintain professional working relationships. He plans to implement training programs for deputy coroners and meet regularly with them to train, conduct case reviews and to review policy and procedures.

A goal of Robert’s for the Coroner’s Office is to introduce community involvement, including child fatality prevention efforts, suicide prevention efforts and in providing safe drop off locations for prescription pills.

Robert currently serves on the 9th Judicial District’s Victim Assistance Law Enforcement (VALE) Board, the Grand Valley Parent Teacher Organization, is active in his community as a former board member of the Grand Valley Fire Protection District, and as a coach on his kids’ t-ball teams.

The Coroner’s Office will be relocated to a new office at 1806 Medicine Bow Court in Silt.