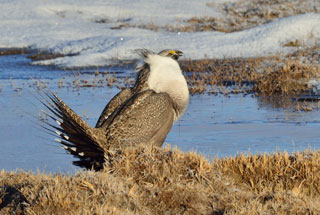 The BLM has released an approved record of decision (ROD) on amendments to its northwest Colorado greater sage-grouse resource management plan that reflect contributions from Garfield County.
Sage grouse 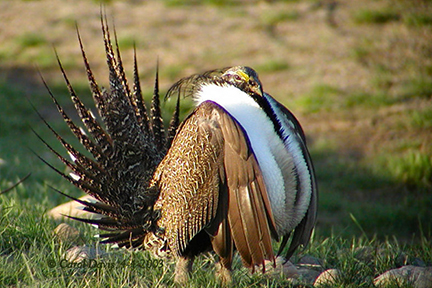 Garfield County has received 138 records from a Freedom of Information request to the US Department of Interior after filing a lawsuit. The county found the DOI did not get public input on late changes to its Environmental Impact Statement and Record of Decision released in September, 2015 for Northwest Colorado.

The Greater Sage Grouse does not warrant protection under the Endangered Species Act the U.S. Department of the Interior announced September 22, 2015. The U.S. Fish and Wildlife Service attributes unprecedented conservation efforts across the western U.S.
sage grouse decision

On November 17, 2014, the Board of County Commissioners approved the first amendment to the Garfield County Greater Sage-Grouse Conservation Plan. The purpose of this plan is to provide private and public land owners with land management principles, policies, incentives, and best management practices based on the best available science.
Greater Sage-Grouse Conservation Plan document

Purpose of the plan

The purpose of the Garfield County Sage-Grouse Conservation Plan (the Plan) is to provide private and public land owners with land management principles, policies, incentives, and best management practices based on the best available science that are tailored to fit Garfield County’s unique landscape and habitat characteristics for the betterment of the species.

Because of the County’s unique landform, elevation, topography and vegetative cover that differ drastically from the rest of the national range, the Board of County Commissioners (the Board) commissioned an in-depth analysis, based on best available science, to determine what suitable habitat exists in the County at a refined level never before completed to obtain a very realistic and accurate picture of what suitable habitat exists.

The land located within the Plan Area is primarily held in private ownership with the Bureau of Land Management (BLM) representing the only public land. Coincidentally, most of the public lands and private property in this area contain significant oil and gas resources that are actively being developed or are intended for future development. By design, this Plan will continuously adapt as science expands for the species and habitat as well as acknowledging advances in energy exploration technology that continue to reduce the disturbance footprint. Ultimately, this will result in adaptive land management policies intended for the survival and success of the species.

As implemented, this Plan shall require these policies and principles be applied on public lands as ‘regulatory assurances’ through Coordination and they will be applied on private lands as ‘incentive-based assurances.’ In this way, this Plan serves as a planning tool for private land owners by informing and improving their conservation efforts on a voluntary basis with the added opportunity to amend this Plan as a result of their stewardship successes.

Finally, because of the scientifically sound habitat modeling conducted to identify the suitable habitat in Garfield County which is the basis of this Plan, the County intends that this Plan may serve as a model for other counties located within the national range. Furthermore, this Plan explicitly relies on the Coordination process that requires federal and state agencies with sage-grouse management responsibilities in Garfield County to ensure that their plans are consistent with this Plan. Ultimately, the Coordination process will be the vehicle that brings disparate parties together with the same intent on making sound land management decisions that benefit the sage-grouse and its habitat recognizing that there are multiple uses being managed at the same time.

The Plan Area includes the area where the suitable habitats are located within Garfield County and are primarily limited to the western region of the county in occupied habitats on the Roan Plateau (see Figure 1, below). Approximately 85% of the land within the Plan Area does not support habitat characteristics necessary to support the sage-grouse, but within this area there are small but important patches of suitable habitat. In order to ensure that habitat containing, or has the potential to contain, sage-grouse is properly managed; this Plan and the associated maps identify distinct habitat categories in the Plan Area including Suitable Habitat, Temporarily Disturbed, Unoccupied Suitable Habitat, and Lek No Surface Occupancy (NSO) Habitat.

Garfield County Commissioners are encouraged by the letter sent by the Governor to the Bureau of Land Management (BLM) because it aligns closely with the points and efforts made by the Commissioners since they began working with our federal agencies in 2005 to reach a balanced approach to protect and conserve habitat for the Greater Sage-Grouse as well as allow for multiple uses on our federal lands including grazing and energy development. Main points made by the Governor of Colorado to the BLM regarding Greater Sage-Grouse planning conservation efforts are:

This presentation is based on a draft response to the BLM Draft EIS. Additional comments will be presented to the Board of County Commissioners Tuesday and possibly on December 2 for the final response to the Draft EIS.

Video of presentation to the Board of County Commissioners November 18, 2013 on draft Comments on the BLM’s NW Colorado Greater Sage Grouse Draft Resource Management Plan and Draft Environmental Impact Statement.

Garfield County participated as a Cooperating Agency as the Bureau of Land Management (BLM) crafted the four alternatives in the Draft Environmental Impact Statement (DEIS) prior to its public release. Additionally, the county hosted five coordination meetings with a variety of state and federal agencies, including the BLM, in order to provide a forum to attempt to point out and resolve inconsistencies between the BLM’s planning efforts and local efforts by Garfield County. Unfortunately, despite the effort by the county, the inconsistencies between the BLM’s DEIS and the county’s Greater Sage Grouse (GSG) Conservation Plan remain unresolved.