Mike was first elected in November 2008 and is currently serving a fourth four-year term, which began in January 2021. Mike is a native of Garfield County, having been born in Glenwood Springs on August 29, 1954. He has lived in Rifle much of his life, attending public schools from kindergarten through his senior year in Garfield RE-2 School District. Mike graduated from Rifle High School in May 1972. After graduating from Brigham Young University in 1979, Mike began his teaching career in August, 1979. Later he received his master’s degree from Western State College in 1988.

During his 25 years of service as a teacher in the Garfield RE-2 School District, he coached volleyball, baseball and speech teams. He was also the student council sponsor during that time.

Mike served on the Rifle City Council as Mayor Pro Tem during the boom and bust years, 1979–1983. After 25 years of teaching, Mike served as a high school administrator, namely the dean of students for five years. Upon being elected as the Garfield County Commissioner for District 3, he retired after 30 years of service at Rifle High School.

Mike has been married to Janet for 35 years. They have raised 7 children: Kathryn, Herb, Marilyn, Mikey (deceased), Stephanie, Steven and Sandy.

Mike has always felt a closeness to the land and people of Garfield County. This is his home. He believes that one of the most important things that we must learn as individuals in this life is service to our fellow human beings. He is honored to be blessed with a wonderful life and family and fortunate enough to be elected by the good people of Garfield County to represent them as a county commissioner. He pledges to you, the citizens of Garfield County, to be honest, fair and worthy of your trust. He continues to work together with others for a united Garfield County.

If you have any questions, comments or concerns, please give Mike a call. He will be happy to visit with you at your home, office, ranch, farm, or business. If you feel so inclined, you can visit Mike at his main office in the County Administration Building at the Garfield County Airport in Rifle, or you can drop by and see him at the County Administration Building located across from the courthouse in Glenwood Springs.

Mike believes Garfield County has done well during his first term. Much of that can be accredited to working with other elected officials as well as a great staff. He thanks all of you for your continued support, faith, and trust in him as commissioner. Garfield County is a great place to live, work and play. Let’s continue working together to make it even better. 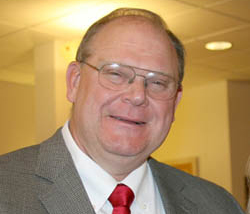